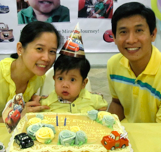 Looking back, Tina recalled the miracle prayer list she had written last January and Ethan not taking PROGRAF is one of them (so that his immune system will go up)! Truly, God has done another miracle for our precious son. Doctors cannot really conclude if Ethan will still take the PROGRAF later on. But they are delighted about his condition now. He is only taking steroids as immunosuppression and this is truly amazing! Since March, his blood count and liver functions are stable. His growth has been steadily advancing. His weight and height are catching up fast. He is learning new words everyday. One time over dinner he exclaimed, “Daddy, mang-ow pleeease....pleeease. Ow-kay?” And asks, “Mummee, ask, woh-ter, woh-ter (water), pleeease!” He can now say some of the food he eats like banana, hotcake, apple, bread, milk, etc...(and sometimes with a Singaporean accent) ☺.
Posted by EthansFriends.com at 10:18 PM